The first-ever Hatteras Cup fishing tournament, which kicked off on June 1st, already has 44 teams and more than 160 anglers registered just two months after getting underway. The Hatteras Cup gives Hatteras owners and teams the chance to try for a share of a $115,000 purse by competing in seven different categories—Blue Marlin, Catch & Release, Dolphin, Grouper, Snapper, Tuna, and Wahoo. There’s still plenty of time to get in the game before the contest ends on January 31st. What's more, if you register for The Hatteras Cup and catch an IGFA World Record-breaking Atlantic Blue Marlin on a Hatteras in a sanctioned tournament before the end of this year, you might just have a million dollars on the line.

So far, anglers have entered 50 catches in The Hatteras Cup competition. Currently leading the Blue Marlin category and contending for its $50,000 prize is the team on Hatteras GT70 Notorious. Team Notorious won the Blue Marlin Division of the Lone Star Shootout, which took place out of Port O’Connor, Texas, on July 24-27, with angler George McMahon’s 615-pound catch (shown below, at the weigh-in). Notorious also took 3rd Place overall in the tournament.

The leader of the Catch & Release division currently is the Hatteras GT63, Post One—which just crossed the Atlantic Ocean on its own hull, supported (and refueled by) its 147’ mother yacht Dorothea III! Team Post One has entered 1,200 points worth of eligible fish in The Hatteras Cup Catch & Release contest to date: a 250lb. Blue Marlin, 175lb. Blue Marlin, and a 50lb. White Marlin (shown below). While the team on the Hatteras 60 convertible Hot Black & Sticky currently is at the top of the Dolphin Division leaderboard, kudos are due to Carlyle Cornell (below) for winning second place in the 2018 South Carolina Governor’s Cup Billfishing Series. Carlyle caught her 22.3lb. mahi on Reel Deal, a GT45X. Team Reel Deal also is in 2nd place in The Hatteras Cup Dolphin Division.

If grouper is your game, the mark to beat right now is 8.2lbs. That’s the weight of the fish that Team Hot Black & Sticky has entered in the Hatteras Cup Grouper Division. We are looking for a hot contest in this division since we’re sure there are bigger grouper lurking out there ripe for the catching. Don’t let this grouper run unopposed!

Hot Black & Sticky has been busy – this hard-charging Hatteras also tops the leaderboard in the Snapper Division with a 23.2lb. entry (below). Now that looks like one delicious fish! The Hatteras Cup Tuna Division also is hotly contested, with five fish over 145 lbs. entered so far. Top of the leaderboard in this division is the Hatteras GT60 Miss Wilder, with a 205lb. tuna. Team Miss Wilder (below) hooked that fish – and plenty more – at the Oak Bluffs Bluewater Classic, held on Martha’s Vineyard on July 18-21. Team Miss Wilder also leads the Wahoo Division with a 42-pounder. 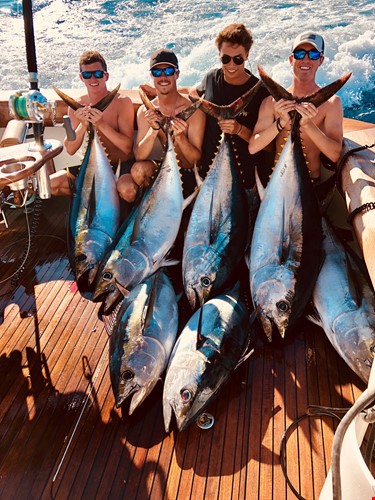 If you want to make history on your Hatteras, this could be your year. You’ll find The Hatteras Cup rules and other info at www.HatterasYachts.com/HatterasCup. Break records with the boat that’s built to break waves—register your boat and team today.

If you just want to follow The Hatteras Cup action, that’s fine, too. Check out #HatterasCupCatch on Instagram and Facebook to see photos of Hatteras Yachts and the fish they raise in pursuit of $1.115 million in prize money.

Tight Lines to all you Hatteras Cup contenders!